It’s been another exciting week here at MRHQ – never a dull moment! Hard on the heels of signing with Melodic Revolution Records, we’re really happy to be able to reveal that we’ve found a full time replacement for Gibbo on drums – Mr Nigel Durham. Nigel is well known in the NWOBHM field, having been in Saxon and Oliver/Dawson Saxon.

Nigel will take over from Henry Rogers who’s done a spectacular job standing in since Gibbo left, but his existing commitments with DeeExpus and Touchstone and as a session player meant that this could only be a temporary situation. We’re enormously grateful for Henry’s massive commitment and hard work to step in at short notice and save the tour!

We’re all really excited about Nigel joining the band, and again, it’s been almost impossible to keep quiet about this over the last week or so since we finalised things. Looking forward to a fantastic new era for the band with Nigel behind us, and we’re sure you’ll give him a big welcome to MR! 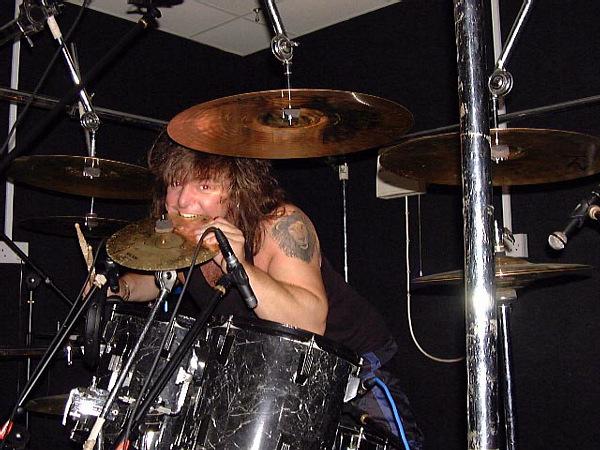 We are very pleased to announce that Nigel Durham (ex Saxon, ex Oliver/Dawson Saxon) has joined Morpheus Rising as full time drummer. Nigel is a fantastic drummer with an outstanding pedigree, and we’re delighted to welcome him into the band.

Nigel is no stranger to rock audiences, having played on Saxon’s Destiny album, and several albums with Oliver/Dawson Saxon, including Re:Landed and It’s Alive. We are really looking forward getting stuck into rehearsals with him, preparing current material for the live set and new songs for the album sessions.

We are extremely grateful to the one and only Henry Rogers for stepping in to the breach and filling the drum vacancy for the recent tour with Panic Room, and the Bikes Bands and Booze show last weekend. Without all his outstanding hard work and dedication at relatively short notice, we could not have done these gigs, and we’ve really enjoyed having him as part of the MR gang – even if only briefly!

We’re all looking forward to the new album and a new era with Melodic Revolution Records, and with Nigel joining the band too, we’re really hungry to get cracking. As Nigel says “Can’t wait to get my teeth into Morpheus Rising!”